A new MagicBand (officially called an Oceaneer’s Band by Disney) is on the way for the kid’s activity clubs on Disney Cruise Line ships. Arriving a bit late for 2016, this new band is a totally new design and features three characters. It also doesn’t show the year on it like previous Disney Cruise Line bands have in the past. It’s important to note that these bands, if taken home from the cruise, cannot be linked for use at Walt Disney World at this time.

Here’s a look at the band that will be arriving on ships any day now: 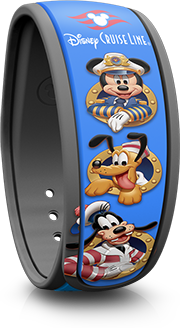