The Disney Dreamers Academy has again held an event for 2017 from March 16 – 19, 2017, and in keeping with tradition for the past two years, attendees again received special MagicBands. This year the band graphics have been updated to reflect the 10th anniversary of the program, as well as to adhere to MagicBand 2 changes. 100 kids get chosen per year to attend Disney Dreamers Academy, and it’s very difficult to be a part of the DDA group, as you have to apply and be accepted by Disney based on specific qualifications.

This year, in changing with the past, invitees were given one of five different MagicBand colors: orange, purple (new color altogether), blue, green, red (new color for Dreamers). In previous years, the red color was reserved for VIP, media, and press. This year it appears only VIP were given a gray MagicBand. Each band has a new 10th anniversary Dreamers logo on it in white. There is no yellow or pink band this year, and all bands are now MagicBand 2.

The kids were teamed up in groups for the event based on their colored bands. Parents chaperoning their child to the event were given the same color MagicBand. Invited Alumni were also given bands with logos on it and grouped into the teams. Some MagicBands have a name on the back and some don’t.

There are probably no more than 300 of these given out each year (100 kids chosen + staff, alumni, parents, event guests, and speakers). The difficult part about collecting for this year’s event is that this is the only year with the 10th anniversary logo on them. 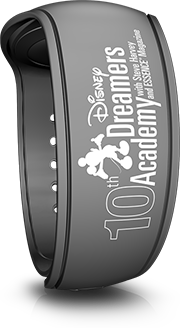